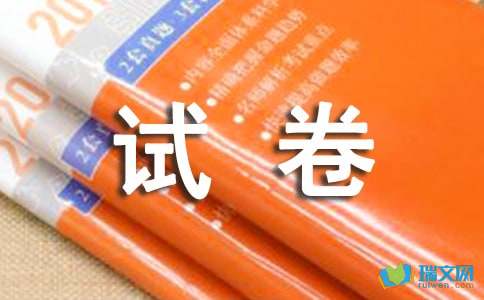 My father listened to me? ___ , and then he asked, “Are the things she said true or not? Go and make a list of everything she said and mark the points that are true. Then pay no attention to ____? things she said.”

Many years have passed. The situation often appears in my mind. In our life, we often meet with some trouble and we often go to someone for?? ___? which we will treasure all life!

Each year, a huge number of Chinese middle school students go to study in foreign countries such as the US, the UK, Australia and Japan.

“Chinese children hope very much to go ____ to get a wider view of the world,” said Chen Yi, a Chinese writer who has lived in America for 16 years. In a talk Chen told more than 300 parents and their children thought that life in foreign countries can be ____for young people.” They have to deal with a cultural shock and language? ____??? .

However, these are not the most difficult? things. To most children looking after themselves when studying alone in a foreign country is a big? _____? .

Zhang Jia, a 16-year-old student, began to study in a high school in Sydney, Australia last October. To his amazement, his teachers there ____ pushed students to study. And usually there wasn’t homework. “With these education systems, we have more? ____time and more space for thinking,”said Zhang. “But? if you don’t? know how to____your time and money to good use, you will not have an easy time,” Some of his friends spent their whole year’s money in the first two months of the term, and they? _____ their exams.

“Studying abroad at a young age can help students learn a foreign language____and open up their eyes, but students and parents should know about the challenges,”Chen said.“If you want to study abroad, try to talk to someone with? ______ in foreign countries. Make sure that you are ready for it.”

How much do you know about Chicago in the United States? You might think it’s a big city. And it is! Chicago is actually the third most populous (人口众多的)? city in the US, right after New York City and Los Angeles.

“The Windy City” is Chicago’s most famous nickname. It is for good reason. The city lies right next to Lake Michigan and heavy winds blow through the city.

Chicago is very well known for its art and culture. The Art Institute of Chicago is the No.1 place to visit in the city. It is not only a school, but also a world-class art museum.

If you don’t feel like visiting a museum, your best choice is to visit Millennium Park. This park holds the famous Cloud Gate which looks like a big shining bean. Many people enjoy taking photos there.

Chicago has lots of fun things to do. If you enjoy heights, go visit the famous Willis Tower! You can go up to the top of it and step out onto a glass box. You’ll be standing over the city, but don’t worry ---- it’s completely safe. Doesn’t Chicago sound like a fun city?

1.Chicago has the largest population in the US.

2.Chicago is famous for its heavy winds and rain.

3.The Art Institute of Chicago is both a school and a museum.

5.You can be standing over Chicago on top of Willis Tower.

One day at work, my American coworker and I decided to go out to lunch together. We saw one restaurant that sold specialty dishes from Xi’an.

We decided to try it out. My coworker said, “Maybe we can have some ‘Roger Moore’ (a famous British actor)!” I felt confused, so I asked her what she meant. She explained that she was talking about roujiamo (肉夹馍),? which sounds like the name “Roger Moore”. It’s a type of Chinese snack that comes from Shaanxi province.

My first thought was that the roujiamo was very similar to an American hamburger. The pieces of flatbread were like hamburger buns, with meat in the middle.

Our roujiamo were made fresh, so the bread was still warm. It was soft and fluffy (松软 的) when I bit into it. The meat inside was salty and tender (嫩的). It was quite delicious.

Roujiamo is popular in other countries, too. In the United States, a businessman named? Jason Wang opened more than 10 chain restaurants called “Xi’an Famous Foods”. Roujiamo is one of their most popular dishes. The restaurants attract about 140,000 customers every year, according to Forbes magazines.

A. a kind of American foodB. created by the British actor Roger Moore

C. like the American hamburgerD. a Chinese snack from Shaanxi province

2.Which is NOT true about roujiamo’s flavor?

A. Jason Wang makes the best roujiamo in China

D. roujiamo is very popular in the UK.

What might life be like if you looked very different from others? Most of us are lucky to be born with “normal” faces. But the movie Wonder (《奇迹男孩》) shows us that there is no such things as being normal and that beauty is more than skin-deep.

Based on a bestselling novel, the movie is about a boy named Auggie. He has a facial deformity (面部畸形).? He has spent most of his life being home-schooled. But as he enters middle school, his parents decide to send him to a private school. There, Auggie must deal with some unfriendly classmates and learn to accept himself as he is.

In the United States, most kids are taught that it is OK to be different. People don’t look down upon being special. But some kids have difficulty accepting this. It is easy to play tricks on someone who is different, especially if you have your own problems to deal with. This is another central theme from the movie ----? even the kids who laugh at Auggie have their own personal struggles.

As Auggie’s classmates get know him better, they come to find that he’s a nice kid with a great sense of humor. They start to change their attitude to him. In real life, it may take longer to see such changes happen. But if we give people a chance, their hearts and minds may change in the end.

1.Which is NOT true about Auggie according to the writer?

A. He has a facial deformity.

B. He has been home-schooled for many years.

C. His family sends him to a private school.

D. He always becomes sad because of others’ attitude.

A. have a sense of humorB. accept his difference

C. have difficulty accepting different peopleD. want to be home-schooled as well

Many of us may have experienced the pleasant surprise of seeing recommended (推荐 的) songs after you listen to certain songs on a music app. When we open shopping websites, we are more likely to see things on the home page that we might want to buy.

This is based on data ( 数 据 ). Data is no longer only about numbers, but information from almost every aspect of our lives: our location, shopping habits and interests. All of this is called “big data”.

In December, President Xi Jinping called for China to speed up its big data strategy in order to better serve social and economic development and improve people’s lives. He also asked for greater use of big data in areas like education, social security and transportation.

The past few years have seen big data being used more often in China. The role it plays in tourism is just one example.

The data travelers? share online? is? providing?? the tourism? industry? with? a? lot? of information about the country’s scenic areas. After the data is analyzed? ( 分 析 ), different scenic areas can create their own online introduction for other travelers to see.

The introduction not only show travelers’ reviews, but also tell the scenic areas which services need to be improved.

Big data is also an important growth engine ( 增 长 引 擎 ) for economic development. With an annual growth rate of 30 percent, sales of big data services and products in China will reach one trillion yuan yearly by 20xx.

A. Songs and shopping lists.B. Technologies and habits.

2.What is the purpose of developing “big data” in China?

A. To make it an international trend.

B. To collect as much information as possible.

C. To better serve the development of China.

3.The underlined words “scenic areas”? in Paragraph 5 might mean _____in Chinese.

4.The writer gives the example of tourism in order to_____.

A. attract readers to travel around the country

B. help travelers learn to use online profiles

C. show how “big data”? is used in China

D. explain why “big data” is a growth engine

The 11 digits can be divided into three parts. Each pare has a different meaning. The first three numbers tell you which mobile phone service provider you are using. For example,135 is for the China Mobile Communications Corporation ( 中 国 移 动 ) and 188 is for China Unicom ( 中 国 联 通 ). The fourth to the seventh digits tell you which region the number is registered (注册) in. And the last four digits are random (随机的).

The main reason for using 11 digits is that we have the largest population in the world. We once had 10 numbers. But as our population grew, there were not enough numbers for us to use. So we began to use 11 digits starting from 1999.

Eleven digits can be used to make tens of billions of mobile phone numbers, according to the Xinhua News Agency. That’s enough for each person to have seven or eight phone numbers to use in China.

Plus, mobile phone numbers can be recycled. Usually, the service provider will reuse a canceled number after three to six months. If you call a number that you haven’t contacted for a long time, you may find that its owner has changed.

Besides China, Britain and Japan also use 11-digit? mobile phone numbers. But their numbers always start with 0. So they cannot create as many numbers as we can. Countries like? the United? States,? Australia? and India? use phone numbers? with 10 digits.? Canada’s mobile phone numbers are perhaps the world’s shortest: they use seven digits.

1.Which country has the longest mobile phone numbers in the world?

2.What can we know from the first three digits of a phone number?

3.Why does China use 11 digits for phone numbers?

4.When can a phone number be recycled?

5.Do Canadians have the world’s shortest mobile phone numbers?

Linda: Helen, it’s time for supper. Let’s go to the dining hall together.

Linda: Then, what shall we do now?

Helen: I want to go to the library and return these books first.? 2.

Linda: Let’s go there first, then we’ll go to the dining hall to have supper, OK?

Helen: No problem. Look! Linda! What’s that on the ground?

Helen: Er, it’s brown. It might be Jane’s and hers is brown.