Spring Festival is a kind of chinese traditonal festival, as Christmas day in westen country. 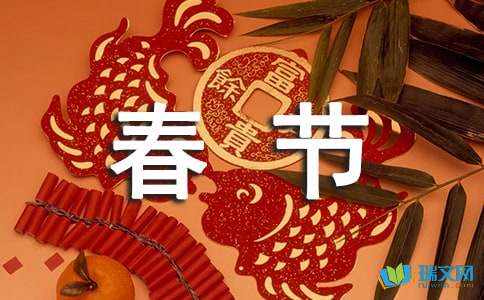 During these days, people share traditonal food with their relations and friends.

Every year during spring festival, children are always very happy, for their uncle, aunt, grandparents, and parent's friends will give them a red pocket with money inside.

On New Year’s Eve, my father and my uncle talked about their work together. My mum did some cooking with my aunt Grandparents and I watched the New Year TV programmes. At about six o’clock, we had a special family dinner. We all thought the dumplings were delicious.

On the first day of the New Year, we visited our relatives. In the afternoon, we went shopping in Jiefanf Road. My uncle bought some Jay’s CDs. He likes Jay’s music very much. There were so many people on the road. It was more alive than any other time of a year. On the second and the third days, we spent a wonderful weekend in the country. There were much bigger trees than in the city. And the animals were more beautiful than in the city. We all enjoyed ourselves.

Will Christmas Replace the Spring Festival?

This worry is fairly unnecessary. Why ? One reason lies that Christmas only affects Christians，college students and joint-venture workers. Another reason is that Christmas is mostly celebrated in cities. Few people in countryside show extreme interest in this exotic festival. By contrast，the Spring Festival is the most influential traditional festival in every family.

I think，it is natural that with increasing exchanges with the West，a lot of Western holidays have been gradually introduced into China. For us Chinese we should never neglect or even discard our own traditional

festivals. For centuries Chinese have observed this traditional holiday to welcome the beginning of a new year. And we will treasure the Spring Festival forever.

On New Year's Eve，our class had a party. The atmosphere was good. It was out of the ordinary from the very begining. The boy student from one bedroom gave an unusual performance. We saw a boy named Li Xinmin turn off all the lights in a sudden snap. Then with three resounding crow of a cock echoing in the hall，the hall was again brightly lit in a snap.

Then，the representative of the bedroom Zhu Guozhang asked us to guess a line of a poem related to the above situation. He added that Li Xinmin alone was born in the year of the dog and the other three were all born in the year of the chicken. They left us all in confusion. And it was our monitor who was quickwitted. He shouted our， "The day breaks as the cock crows three times at dawn." The hall After that，they had another item. This time Li Xinmin was placed in the middle of the circle. While he was standing there，the other three stood around him，each bowing down to him at an angle of 120 degrees. It was an idiom. This time I got it right："The dog stands out among a group of chickens."